ON THE HISTORY OF TIME SERIES ANALYSIS 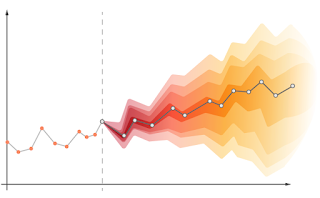 PETER WHITTLE DEVELOPED MANY OF THE STATISTICAL TECHNIQUES later POPULARISED BY BOX AND JENKINS.  THEN EVERYBODY REALIZED THE IMPACT OF INTERVENTIONS CAUSING DISCONTINOUS CHANGE. 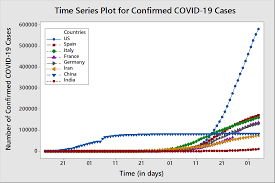 THIS MAKES IT VERY DIFFICULT TO FORECAST AT ALL e.g. DURING THE 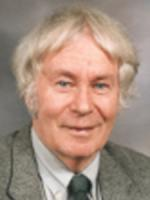 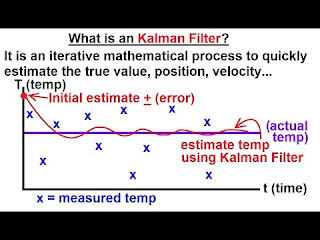 The filtering method is named for Hungarian émigré Rudolf E. Kálmán, although Thorvald Nicolai Thiele[13][14] and Peter Swerling developed a similar algorithm earlier. Richard S. Bucy of the Johns Hopkins Applied Physics Laboratory contributed to the theory, causing it to be known sometimes as Kalman–Bucy filtering. Stanley F. Schmidt is generally credited with developing the first implementation of a Kalman filter. He realized that the filter could be divided into two distinct parts, with one part for time periods between sensor outputs and another part for incorporating measurements.[15] It was during a visit by Kálmán to the NASA Ames Research Center that Schmidt saw the applicability of Kálmán's ideas to the nonlinear problem of trajectory estimation for the Apollo program resulting in its incorporation in the Apollo navigation computer. This Kalman filtering was first described and developed partially in technical papers by Swerling (1958), Kalman (1960) and Kalman and Bucy (1961). 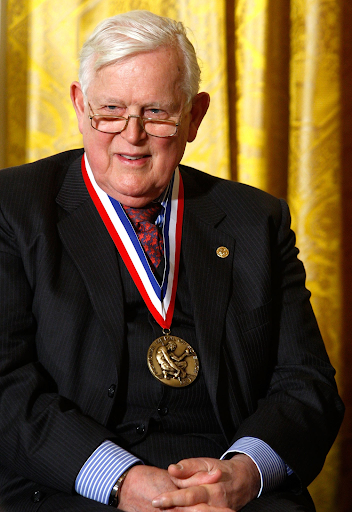 Helped get rockets to the moon

The Apollo computer used 2k of magnetic core RAM and 36k wire rope [...]. The CPU was built from ICs [...]. Clock speed was under 100 kHz [...]. The fact that the MIT engineers were able to pack such good software (one of the very first applications of the Kalman filter) into such a tiny computer is truly remarkable.

In mathematics, the Ornstein–Uhlenbeck process is a stochastic process with applications in financial mathematics and the physical sciences. Its original application in physics was as a model for the velocity of a massive Brownian particle under the influence of friction. It is named after Leonard Ornstein and George Eugene Uhlenbeck 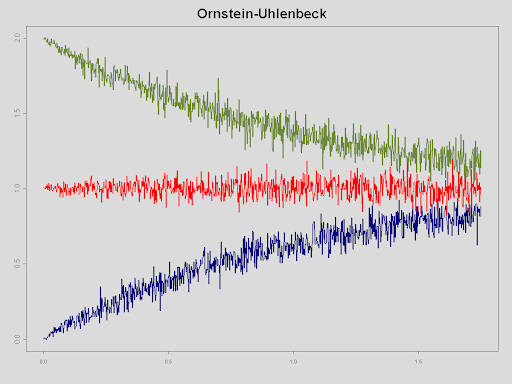 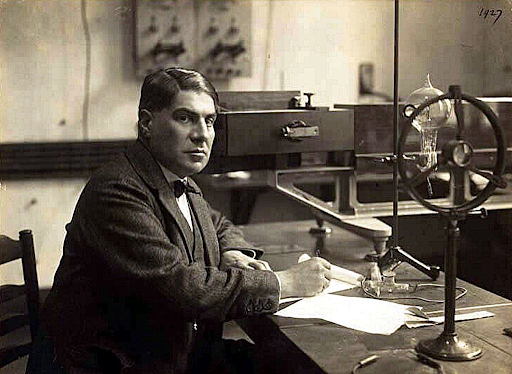 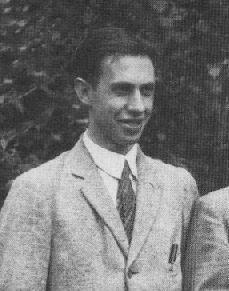 COX PROCESSES When the data are simply points in time, 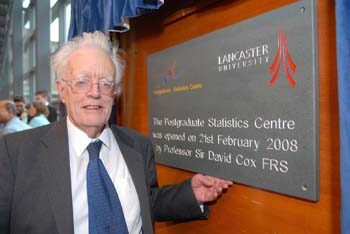 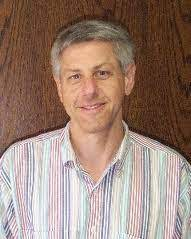 !n the study of detection of a possible change in linear trend at a known time t = T0, as an extension of the statistical model in (1), we consider a piecewise linear trend model of the form 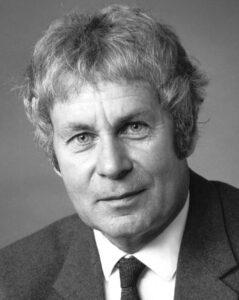 During the 1940s and 1950s the subject of statistical time series analysis matured from a scattered collection of methods into formal branch of statistics. Much of the mathematical groundwork was laid down and many of the practical methods were developed during this period. The foundations of the field were developed by individuals whose names are familiar to most statisticians: Yule, Wold, Wiener, and Kolmogorov. Interestingly, many of the methodological techniques that originated 40 to 50 years ago still play a principal role in modern time-series analysis. A key participant in this golden-age of time-series analysis was Peter Whittle

PETER WHITTLE DEVELOPED MANY OF THE STATISTICAL TECHNIQUES LATER PURLOINED AND POPULARISED BY BOX AND JENKINS AND THEIR MULTITUDINOUS FOLLOWERS. THEN EVERYBODY REALIZED THE IMPACT OF INTERVENTIONS CAUSING DISCONTINOUS CHANGE, AND MANY RESEARCHERS ON THE BANDWAGON SWITCHED TO PATTERN RECOGNITION. 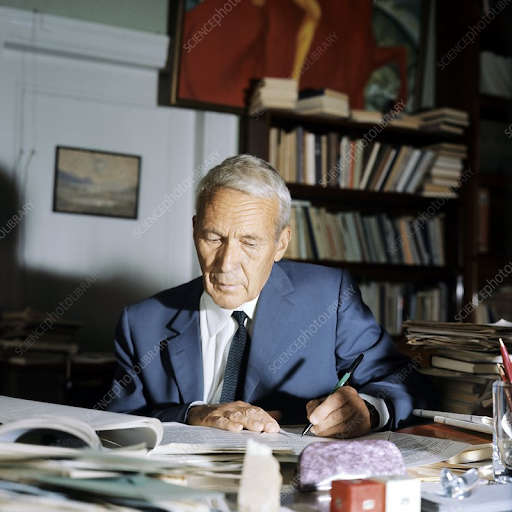 In 1931 Kolmogorov's paper "Analytical methods in probability theory" appeared, in which he laid the foundations for the modern theory of Markov processes. According to Gnedenko: "In the history of probability theory it is difficult to find other works that changed the established points of view and basic trends in research work in such a decisive way. In fact, this work could be considered as the beginning of a new stage in the development of the whole theory".

The theory had a few forerunners: A.A. Markov, H. Poincare and Bachelier, Fokker, Planck, Smolukhovski and Chapman. Their particular equations for individual problems in physics, informally obtained, followed as special cases in Kolmogorov's theory. A long series of subsequent publications followed, by Kolmogorov and his followers, among which a paper by Kolmogorov dealing with one of the basic problems of mathematical statistics, where he introduces his famous criterion (Kolmogorov's test) for using the empirical distribution function of observed random variables to test the validity of an hypothesis about their true distribution. In general Kolmogorov's ideas on probability and statistics have led to numerous theoretic developments, and to numerous applications in present-day physical sciences. 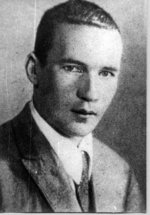 Posted by Thomas Hoskyns Leonard Blog at 03:19 No comments: 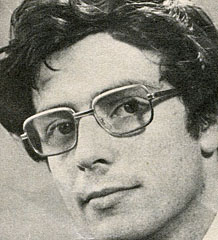 Thomas H. Leonard Wiki
Numerous technical reports e.g. published by the American College Testing Program (1971-2) and by the Department of of the Universities of Warwick ( 1972-1980) have been omitted as have my published  comments on papers which have been read to the Royal Statistical Society, I however include some of my  self-published work. I am still trying to update the links.

11..REBORN ON SOUTRA (2017, Self-Published Novel)
12. INTERVIEW BY DIEGO ANDRES LUIS PEREZ (Bulletin of the International
Society for Bayesian Analysis, 2016)
13.WRITTEN AND VERBAL SUBMISSIONS TO THE  COMMISSION

OF INQUIRY   INTO THE HISTORY OF EUGENICS AT UCL


3. A MODIFICATION TO THE BAYES ESTIMATE OF THE MEAN OF  A NORMAL
DISTRIBUTION (1974) Biometrika
4, COMMENT ON THE ESTIMATION OF PROPORTIONS IN
M GROUPS (1974) Psychometrika

5. Letter on Parapsychology and Coincidences (1974) Sunday Times
Later reproduced in INCREDIBLE COINCIDENCE by Alan Vaughan
6.**. A BAYESIAN APPROACH TO THE LINEAR MODEL WITH
UNEQUAL VARIANCES (1975) Technometrics
Later extensively applied by Jean Foulley, Daniel Gianola, and Rob Tempelman
to Animal Breeding, and by John Geweke to Econometrics.
7 **BAYESIAN ESTIMATION METHODS FOR TWO-WAY
CONTINGENCY TABLES (1975) JRSSB
8. SOME ALTERNATIVE APPROACHES TO MULTI-PARAMETER
ESTIMATION (1976) Biometrika
9. AN INVESTIGATION OF THE F-TEST PROCEDURE AS AN
ESTIMATION SHORTCUT (with J.K.Ord, 1976) JRSSB.
Provides an early Bayesian justification of Akaike's criterion AIC,
10. BAYES ESTIMATION SUBJECT TO UNCERTAINTY ABOUT PARAMETER
CONSTRAINTS (with A O'Hagan, 1976) Biometrika
11. A BAYESIAN APPROACH TO SOME MULTINOMIAL ESTIMATION
AND PRETESTING PROBLEMS (1977) JASA. Another Bayesian justification
of AIC.
12.** AN ALTERNATIVE BAYESIAN APPROACH TO THE BRADLEY-TERRY
MODEL FOR PAIRED COMPARISONS (1977) Biometrics
USCF later considered my methodology for ranking chess players.
13. BAYESIAN SIMULTANEOUS ESTIMATION FOR SEVERAL
MULTINOMIAL DISTRIBUTIONS (1977) Comm. Statist. A

DURING 1980s (Includes long fallow period during time I worked half-time for
U.S. Army with MRC, and until I began by my  research with John Hsu)
1**. THE ROLES OF COHERENCE AND INDUCTIVE MODELLING
IN BAYESIAN STATISTICS (with Discussion,1980) Valencia 1
2.**THE PROBABILITY OF FETAL METALOBIC ACIDOSIS DURING
LABOR IN A POPULATION AT RISK AS DETERMINED BY
CLINICAL FACTORS (with Discussion, 1981 with Jim Low et al)
American Journal of Obstetrics and Gynaecology
3 ** Comment on A SIMPLE PREDICTIVE DENSITY FUNCTION (1982)
JASA. Contains a seminal result introducing conditional Laplacian
Approximations into the Bayesian literature. Amazing accuracy was                                               demonstrated by John Hsu
during his subsequent Ph.D. research. Cited by Tierney and Kadane as source                               reference,
4  AN EMPIRICAL BAYES APPROACH TO THE SMOOTH
ESTIMATION OF UNKNOWN FUNCTIONS (1982) MRC Report

O'Sullivan, Yandell, and Raynor (JASA 1986)
John Hsu and I were not to publish a fully Bayesian approach to semi-parametric
logistic regression until our paper in Biometrika (1997).
5. AN INFERENTIAL APPROACH TO THE BIOSSAY DESIGN
PROBLEM (1982) MRC Report

6. APPLICATIONS OF THE EM ALGORITHM TO THE
ESTIMATION OF BAYESIAN HYPERPARAMETERS (1982)
MRC Report
7.  STATISTICAL INFERENCE FOR THE SKEWED NORMAL
AND RELATED DISTRIBUTIONS (1982, with Louis Broekhoven)
MRC Report

8.  A BAYESIAN APPROACH TO MARKOVIAN  MODELS FOR
NORMAL AND POISSON DATA (1982) MRC Report

14  COMMENT ON THE PAPER BY DIACONIS AND EFRON (1985) Annals of                                Statistics
15. BAYESIAN INFERENCE AND DIAGNOSTICS FOR THE
THREE PARAMETER LOGISTIC MODEL (1985, with M.R.Novick)
ONR Report, cited in psychometrics literature.
16**. BAYESIAN FULL-RANK MARGINALIZATION FOR TWO-WAY
CONTINGENCY TABLES (1986, with M.R. Novick) JES
Includes analysis of the Marine Corps Data, and Laplacian Approximations,
17 ON THE APPLICATION OF AIC TO BIVARIATE DENSITY
ESTIMATION, NON-PARAMETRIC REGRESSION, AND
DISCRIMINATION (1985, with T. Atilgan) in Multivariate Statistical Modeling
and Data Analysis (ed by Bozdogan and Gupta) 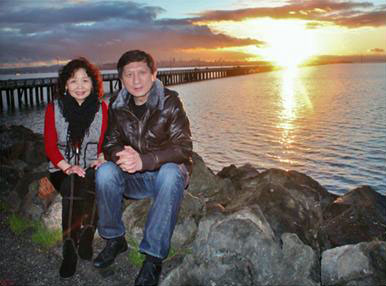 Three joint papers, concerning a statistical approach to radial basis
networks, with International Chess Master Mark Orr and his colleagues in
A.I. are omitted as I did not substantively contribute. They appeared in
the International Journal for Neural Systems (1999, 2000).

The Geophysics patent and two related papers evolved from Chapter 5 of
Orestis Papasouliotis ' Ph.D. thesis The first four chapters of Orestis' thesis
describe his as yet unpublished research, supervised by myself ,on the Bayesian
Analysis of Covariance, with an application in Forensic Psychology. 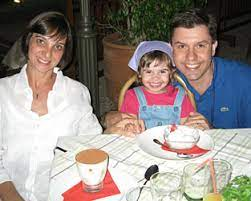 1. BAYES ESTIMATION WITH UNCERTAIN ORDER CONSTRAINTS
(2000, with M.T.Madi and Kam-Wah Tsui) J Stat Plan Inf
2 A TWO-ITEM CONJOINT SCREEN FOR ALCOHOL AND OTHER
DRUG RELATED PROBLEMS (2001, with R.L.Brown et al)
Journal of the Board of Family Practice


14ALL ABOUT ATTENTION DEFICIT DISORDER (2019)  Self-published, in preparation.
15. DISCUSSION (WITH DIEGO PEREZ) OF KIDD AND KATZFUSS'S
DISCUSSION PAPER ON SPATIAL PROCESSES TO ISBA,
BAYESIAN ANALYSIS (2022).
WOW! I HAVE NOW PUBLISHED IN THE INTERNATIONAL JOURNALS FOR 50 YEARS


I have also self-published over 100 poems and published about 10 poems in church publications, the Broughton Spurtle and elsewhere. My short story Joe's Mole (2012) is published in an obscure book. Three earlier self-published novels will soon be removed from circulation, as soon as BT turn off my now obsolete website 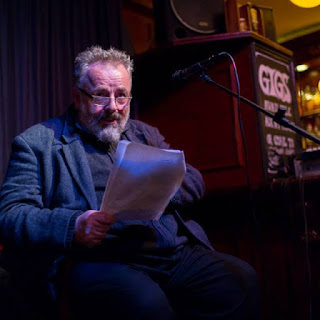 Posted by Thomas Hoskyns Leonard Blog at 07:15 No comments: