From THE INMATES OF GARTNAVEL: A Sonata by James L.S.Carter 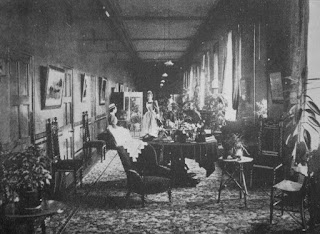 SONATA
Mad Maud! But no, There was a worse than her,
The dreaded and the dreadful Bernadette
That burned her body with a cigarette
And attacked her doctor with a needle spur.
At night all lay awake and all would stir
When Bernadette came singing with no regret,
Taking all liberties the doctors let
Her take and some they didn't. An awful slur
Attached to those who've been inside,
Mostly old ladies and unmarried men,
Who, like a list of sheep in a small pen,
Are made to do whatever doctors decide.
Your pills you can't refuse; neither the dinners
Which makes you sicker than the other sinners.


Posted by Thomas Hoskyns Leonard Blog at 23:01 No comments: