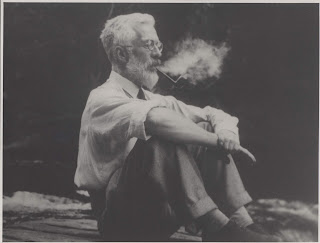 The great statistician and geneticist Sir Ronald Fisher was a positive eugenicist when he helped found the Cambridge Undergraduate Eugenics Society in 1911, Several of his contemporaries at Cambridge advocated Nietzschian ideas on the development of a superhuman race, the  Ubermensch, However, Fisher was a negative eugenicist by 1924. In the Elimination of Mental Defect, he used some very dodgy, subjective statistics which purported to justify the immense and early benefits of the segregation and sterilization of the feebleminded.

For an account of some of Fisher's contributions to Eugenics, and their interaction with Fisher's pioneering but also suspect contributions at Rothampstead Agricultural Research Station to the Statistics of Crop Breeding, see Chapter 3 of Pauline Mazumdar's splendid book Eugenics, Human Genetics and Human Failings (1992),

According to Rodrigo Cruz's 1980   Ph.D. Dissertartion
At the roots of Fisher's intellectual motivations, such as the development of population statistics and genetics, was his concern with the phenomenon he termed ‘differential fertility’. To him, the high reproductive rates of genetically unfit humans for life in society were the main cause of the problems that humankind faced at that time - and would also be the reason for the decline of civilizations throughout history. The fittest needed higher rates of reproduction, and to Fisher, reversing these indexes was vital to the maintenance of civilization.

FISHER WAS STILL A EUGENICIST IN 1952. In his response to UNESCO in THE RACE CONCEPT he expresses the opinion that men were not created biologically equal

See also the references in Scott's three helpful comments (below), and here is what we recently said about Fisher to the Commission of Inquiry into the History of Eugenics at UCL


Sir RONALD FISHER (1890-1962) succeeded Karl Pearson to the Galton Chair of Eugenics in 1933 and served as head of the Department of Eugenics at UCL from 1933 to 1939. He was seriously and publicly at odds with Pearson and resigned from the Royal Statistical Society because of an ongoing dispute over the chi-squared test which got completely out of hand.

During the sixteen years that the first co-author taught at the University of Wisconsin-Madison, Fisher's pivotal contributions to Statistics and Genetics were extolled by his highly informed colleague George E.P. Box, who however never even once mentioned his much revered father-in-law's experiences in Eugenics.

Dr Bernard Nortonxxx argues that Fisher was primarily a eugenicist. and that this motivated his interest in Statistics and Genetics. Indeed, in 1911 he founded the Undergraduates Eugenics Society at the University of Cambridge. In 1912, Fisher also served as a steward at the first International Eugenics Congress at the University of London in South Kensington in 1912xxxi.

A number of Fisher's contributions to the Eugenics Movement are discussed by Richard Soloway (1995) in his text Demography and Degeneration. For example, on page 159, he reports concerns by Fisher and C.A. Stock (from Eugenics Review 6 No.4. January 1915xxxiii), that during WW1 as women workers were more necessary, both partners needing to work was becoming common amongst those seen as 'eugenically better classes'. Fisher naturalized the gendered nature of housework typically assigned to women. Therefore in Fisher's eyes everyone must keep in their 'rightful place' and he thought women should get back in the kitchen arguing “That the best energies of married women should be devoted to the interests of home and family is a proposition about which there is not likely to be any difference of opinion”.

While this was probably unexceptional during the First World War period (and perhaps today too, even in some places!) the misogynist arguments of Fisher are made with a basis in statistics and in the theory of eugenics. Eugenics became a driving force of patriarchal gender roles. These class conscious and quite chauvinistic attitudes provide substantial evidence that Fisher was a bigoted reactionary who was quite prepared to use pseudo-science to achieve his dire socio-political objectives

Joselson (2016a) describes Fisher's analysis of the British 1911 census data, as reported in the Genetic Theory of Natural Selection:

“Fisher’s found a high correlation between inter-generational fertility rates and a strong negative correlation between income and number of children. From this he concluded that fertility rates are genetic, and that genes for low fertility are related to hard work and intelligence”.xxxiv This remarkable leap of logic seems to incorporate Fisher's fanciful idea about gene associations with interpretations of correlations which may require further interpretation in the light of the possible influence of confounding variables.

Based upon these highly subjective, somewhat twisted, conclusions, Fisher proposed giving family allowances to those defined as “fit” which inevitably with Fishers eugenic class prejudices meant the wealthierxxxv.