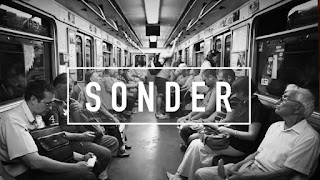 1. Sonder: The realization that each passerby has a life as vivid and complex as your own.
2. Opia: The ambiguous intensity of looking someone in the eye, which can feel simultaneously invasive and vulnerable.
3. Monachopsis: The subtle but persistent feeling of being out of place.
4. Énouement: The bittersweetness of having arrived in the future, seeing how things turn out, but not being able to tell your past self.
5. Vellichor: The strange wistfulness of used bookshops.
6. Rubatosis: The unsettling awareness of your own heartbeat.
7. Kenopsia: The eerie, forlorn atmosphere of a place that is usually bustling with people but is now abandoned and quiet.
8. Mauerbauertraurigkeit: The inexplicable urge to push people away, even close friends who you really like.
9. Jouska: A hypothetical conversation that you compulsively play out in your head.
10. Chrysalism: The amniotic tranquility of being indoors during a thunderstorm.
11. Vemödalen: The frustration of photographic something amazing when thousands of identical photos already exist.
12. Anecdoche: A conversation in which everyone is talking, but nobody is listening.
13. Ellipsism: A sadness that you'll never be able to know how history will turn out.
14. Kuebiko: A state of exhaustion inspired by acts of senseless violence.
15. Lachesism: The desire to be struck by disaster - to survive a plane crash, or to lose everything in a fire.
16. Exulansis: The tendency to give up trying to talk about an experience because people are unable to relate to it.
17. Adronitis: Frustration with how long it takes to get to know someone.
18. Ruckkehrunruhe: The feeling of returning home after an immersive trip only to find it fading rapidly from your awareness.
19. Nodus Tollens: The realization that the plot of your life doesn't make sense to you anymore.
20. Onism: The frustration of being stuck in just one body, that inhabits only one place at a time.
21. Liberosis: The desire to care less about things.
22. Altschmerz: Weariness with the same old issues that you've always had - the same boring flaws and anxieties that you've been gnawing on for years.
23. Occhiolism: The awareness of the smallness of your perspective.-
Posted by Thomas Hoskyns Leonard Blog at 12:16