WISHING YOU A VERY MERRY SATURNALIA 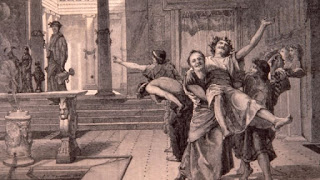 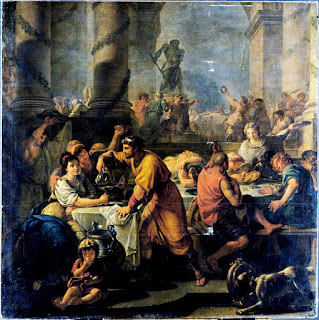 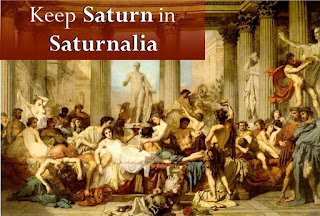 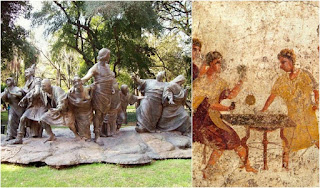 Saturnalia was an ancient Roman festival in honour of the god Saturn, held on 17 December of the Julian calendar and later expanded with festivities through to 23 December. The holiday was celebrated with a sacrifice at the Temple of Saturn, in the Roman Forum, and a public banquet, followed by private gift-giving, continual partying, and a carnival atmosphere that overturned Roman social norms: gambling was permitted, and masters provided table service for their slaves as it was seen as a time of liberty for both slaves and freedmen alike.[1] A common custom was the election of a "King of the Saturnalia", who would give orders to people, which were to be followed and preside over the merrymaking. The gifts exchanged were usually gag gifts or small figurines made of wax or pottery known as sigillaria. The poet Catullus called it "the best of days".[2]

Saturnalia was characterized by role reversals and behavioral license.[5] Slaves were treated to a banquet of the kind usually enjoyed by their masters.[5] Ancient sources differ on the circumstances: some suggest that master and slave dined together,[42] while others indicate that the slaves feasted first, or that the masters actually served the food. The practice might have varied over time.[7]
Saturnalian license also permitted slaves to disrespect their masters without the threat of a punishment. It was a time for free speech: the Augustan poet Horace calls it "December liberty".[43] In two satires set during the Saturnalia, Horace has a slave offer sharp criticism to his master.[44] Everyone knew, however, that the leveling of the social hierarchy was temporary and had limits; no social norms were ultimately threatened, because the holiday would end.[45


People decorated their homes with wreaths and other greenery, and shed their traditional togas in favor of colorful clothes known as synthesis. Even slaves did not have to work during Saturnalia, but were allowed to participate in the festivities; in some cases, they sat at the head of the table while their masters served them.Instead of working, Romans spent Saturnalia gambling, singing, playing music, feasting, socializing and giving each other gifts. Wax taper candles called cerei were common gifts during Saturnalia, to signify light returning after the solstice

Saturnalia saw the inversion of social roles. The wealthy were expected to pay the month’s rent for those who couldn’t afford it, masters and slaves to swap clothes. Family households threw dice to determine who would become the temporary Saturnalian monarch. The poet Lucian of Samosata (AD 120-180) has the god Cronos (Saturn) say in his poem, Saturnalia:

‘During my week the serious is barred: no business allowed. Drinking and being drunk, noise and games of dice, appointing of kings and feasting of slaves, singing naked, clapping … an occasional ducking of corked faces in icy water – such are the functions over which I preside.’

The influence of the Saturnalia upon the celebrations of Christmas and the New Year has been direct. The fact that Christmas was celebrated on the birthday of the unconquered sun (dies solis invicti nati) gave the season a solar background, connected with the kalends of January (January 1, the Roman New Year) when houses were decorated with greenery and lights, and presents were given to children and the poor. Concerning the gift candles, the Romans had a story that an old prophecy bade the earliest inhabitants of Latium send heads to Hades and phota to Saturn. The ancient Latins interpreted this to mean human sacrifices, but, according to legend, Hercules advised using lights (phos means “light” or “man” according to accent) and not human heads. 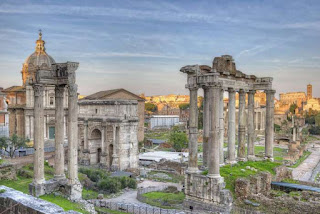 The Temple of Saturn in Rome
Posted by Thomas Hoskyns Leonard Blog at 09:30