ON CLIMATE CHANGE AND THE ARMAGEDDON THAT AWAITS US 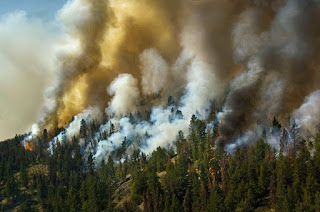 It is very important to understand the enormously grave difficulties we face in trying to prevent climate change from destroying the world as we know it within the next few decades. I understand that lots of scientific research is currently being directed at determining the very drastic sorts of measures that need to be taken (e.g. refreezing the polar icecaps, directly reducing the amount of carbon dioxide in the atmosphere, complete cessation of war).

It is very well established, e.g.by geologists, that greenhouse emissions are continuing to severely harm our natural environment,

However, reducing greenhouse gas emissions on a nation to nation basis, while highly laudable, is simply not enough. It is also virtually impossible to enforce since individual nations are very likely to manipulate and misrepresent the (in Scotland very sparse) statistics to their advantage,

Furthermore, the short and medium term profit motives of our three-centuries-old Capitalist system will almost certainly prevent the drastic sorts of changes we need to save the world. Maybe I am pipe-dreaming when I express the hope that Capitalism can be persuaded to peacefully destroy itself in its current form. But failing this we face the real prospect of a terrible Armageddon, namely the possibility of a violent world-wide revolution in a last ditch attempt to save the planet, followed by the probable destruction of everything we know by natural disaster.

The only small contribution I have made to this process is to recommend to the Commission of Inquiry into the History of Eugenics at UCL that UCL funds more research into the Climate Change problem. Climate change has numerous intersectional effects. It for example already discriminates against many of our indigenous populations.

I am now contemplating whether to support the Edinburgh Green Anti-Capitalist Front since it offers a much more rational, and less clownish, perspective than Extinction Rebellion.

Maybe, however, we should simple encourage our children to think and act for us. 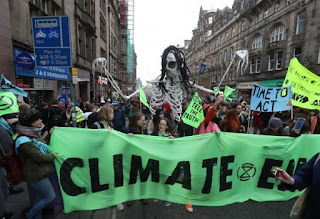 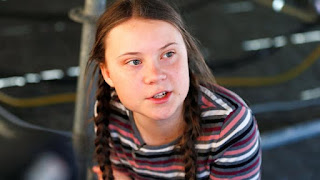