WE SHOULD LIVE HOW SYLVIA  RIVERA LIVED, AND SWEAR HOW SYLVIA RIVERA SWORE, WHATEVER THE TWISTED DO-GOODERS THINK 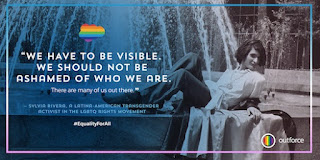 This blog post is my response to apparent Quaker transphobia when I was bullied as an LGBT person while representing part of the Edinburgh trans gender community in Marie Delices Cafe in Morningside Edinburgh on 8th November 2019. I walked out of the meeting when I was effectively prevented from posing a question to Daniel Johnson MSP regarding the Gender Recognition Act. (More indication of what happened during this lunchtime meeting with three leading Quakers is added below, beneath a picture of my transgender ex-partner Nicola.) 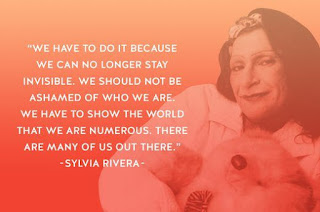 
Latino Gay Men of New York (LGMNY), a social group established in 1991, invited the Bronx-born, Venezuelan/Puerto Rican Stonewall veteran, transgender activist, and Young Lords member Sylvia Rivera (1951-2002) to be a guest speaker at its monthly "First Friday of the Month" meeting in June 2001. This meeting was organized as a celebration of LGBT Pride month, in commemoration of the Stonewall riots of 1969, a landmark event in the history of gay liberation. The meeting was held at the temporary building that the Lesbian and Gay Community Center was occupying near Gansevoort Street while its main building on 13th Street was being renovated. Since Sylvia was banned from entering the Center (see transcription), we had to secure a special permit in order for her to gain admittance. She came with her life partner Julia Murray. The meeting began with small group discussions of the legacy of Stonewall, followed by Sylvia's talk. The gathering concluded with a surprise rendition of "Happy Birthday" and the eating of cake and strawberries, an advance celebration of Sylvia's 50th birthday, which was to occur in July. Sylvia passed away from liver cancer several months later, in February 2002. The recording of Sylvia's talk unfortunately does not include the very beginning of her presentation. Particularly interesting, in addition to Rivera's recollection of the Stonewall riots, of early 1970s activism, and of the 1973 schism regarding the inclusion of drag queens in the broader movement, is her discussion of current trans politics in New York and of her participation in World Pride (Italy, 2000), her critique of gay normalization and gay marriage, and her comments on the activism generated by the murders of Matthew Shepard (1976-1998) and Amanda Milan (1975?-2000).

Rivera's gender identity was complex and varied throughout her life.[1][3] In 1971, she spoke of herself as a "half sister".[29] In her essay "Transvestites: Your Half Sisters and Half Brothers of the Revolution", she specifically claims her use of transvestite as applying to only the gay community: "Transvestites are homosexual men and women who dress in clothes of the opposite sex."[29]
In interviews and writings in her later years, notably her 1995 interview with Randy Wicker and her 2002 essay, "Queens In Exile, The Forgotten Ones," she expressed a fluid take on gender, referring to herself alternately as a gay man,[5] a gay girl,[3] a drag queen/street queen,[1][7][8] and again as a gay man,[1] embodying all of these experiences and seeing none of these identities as excluding the others.[1] Rivera writes of having considered gender reassignment surgery much earlier in life, but of ultimately choosing to reject it, taking hormones only near the end of her life.[1]

“You all tell me, go and hide my tail between my legs.
I will no longer put up with this shit.
I have been beaten.
I have had my nose broken.
I have been thrown in jail.
I have lost my job.
I have lost my apartment.
For gay liberation, and you all treat me this way?
What the f**k’s wrong with you all?
Think about that!”

My (Tom's) ex-partner, Today (10th November) I explained on Facebook that I now realise that she was really a real woman when I loved her as a handsome man. In her reply she explained to the effect that unlike Sylvia Rivera, she always tries to be invisible because she lives in fear of her life, At lunchtime on Friday I'd explained to three leading Quakers that transgender women were vulnerable people who, when repressed into feeling that they might not be real women,would frequently become depressed and sometimes take their own lives. Despite mind-bogglingly fierce resistance, from a subset of those present, which seemed contrary to pre-existing consensual Quaker policy, this message was nevertheless transmitted within an hour or so to Daniel Johnson MSP in a meeting, in my angry absence, in his nearby office. Daniel took it very much to heart, and said that he would study it carefully in relation to the ongoing debate regarding the Gender Recognition Act.